Types of Social Influences and Their Effect on Behavior 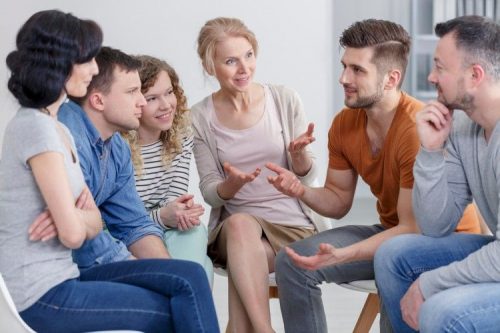 Why do people act the way they do? What causes an individual to make certain decisions or to exhibit certain types of behavior? The field of psychology offers many tools and frameworks for investigating these questions, including the concept of social influences.

Social influence is an umbrella term for the different outside factors that may cause an individual to think or act in a particular way. Specifically, this branch of psychology is concerned with how individuals choose particular patterns of behavior in response to the people, groups or societal norms that surround them.

The notion that people may change their behavior based on the people around them is hardly uncommon. In fact, it’s something familiar to even elementary schoolchildren, who may alter their behavior to “fit in” with certain peer groups. Similarly, adults may sometimes give lip service to certain cultural, political or moral views when they’re in “good company,” even if their private beliefs differ from accepted norms.

In reality, this concept is more complicated. Three primary social influences are paramount:

An understanding of these social influences can be helpful to anyone looking to succeed in sales and marketing, to exert political influence or to meaningfully engage in organizational psychology. The best way to explore social influences in even greater detail is to pursue a formal degree in psychology, where these and other behavioral motivators can be addressed at length.

What Are Social Influences?

The theory of social influences hinges on a basic premise: Individuals are likely to change their behavior according to the social environment in which they find themselves.

Social influences may have an effect on many different levels of an individual’s life. They can change the way a person thinks or the attitudes a person holds based on a desire either to conform with the predominant social group or to assert distinction from it. Because social influences can alter a person’s thinking and beliefs, they can also impact the actions or patterns of behavior that the person adopts.

These changes can manifest themselves in many ways. Some examples include the following:

An important note about social influences is that they can be positive, neutral or negative in effect. Again, consider the example of middle school peer pressure. It may be morally neutral for a boy to buy a certain pair of shoes because he wants to fit in with his peers; on the other hand, it would be negative if the boy started bullying people or stealing due to the influence of a new friend group.

Social influence can also be positive. Consider an individual who feels peer-pressured into joining a regular exercise group and ends up losing some excess weight, or an individual who’s influenced to support a local homeless shelter or an animal rescue organization. These are generally considered socially and personally positive behaviors, regardless of the extent to which they’re influenced by others.

Social influences can be categorized in several ways. One of the most fundamental distinctions is between informational vs. normative social influence.

What Is Informational Social Influence?

Informational social influence describes a situation in which individuals make decisions based on information or data someone else has provided. The individuals accept that the information provided is trustworthy and thus change their thinking, belief or behavior accordingly.

A way to think about informational social influence is that it derives from the desire to be correct. Individuals may base their views or their actions on the opinions of established experts or simply on the opinions of peers whom they find credible and believable. They conform their views to the views of others in an attempt to arrive at the correct conclusion.

Informational social influence can be observed when individuals don’t know what to think about a given topic or how to answer a particular question, and thus they simply copy the viewpoint of a peer whom they perceive to be right.

As an example, consider a man who’s visiting a fancy restaurant for the first time. He doesn’t know the established etiquette for such an environment, but he’s with a friend who’s been in fancy restaurants many times before. To behave correctly, the individual simply emulates the behavior of his friend, assuming it to be acceptable.

What Is Normative Social Influence?

Normative social influence works differently from informational social influence. In this case, individuals change their beliefs or behaviors not necessarily to be correct, but rather to be liked, accepted or just fit in.

Common examples of peer pressure are helpful in understanding how normative social influence works. Anyone who engages in drinking, smoking, vandalism, truancy or other examples of misbehavior to earn the respect of bullies or an “in crowd” is influenced by normative factors.

Social influence can further be broken down into three primary forms: conformity, compliance and obedience. Those who wish to have a full understanding of social influences will need to understand the key distinctions among these forms. To begin with, consider a brief overview of conformity.

Conformity occurs when individuals alter their actions, behaviors or beliefs to gain the acceptance of a group, to impress someone else or to gain a sense of belonging. They may change the way they behave even if they don’t actually share the beliefs of the group they’re seeking to impress. Psychologists cite this as the most common form of social influence.

Conformity can be understood both in terms of the informational and the normative. Normative conformity draws from a concept called internalization, wherein individuals look for social proof regarding what’s right, correct or accepted. In other words, individuals may come to embrace and accept the beliefs of others (to internalize the beliefs of others, making them their own) for the purpose of being liked or accepted.

Normative conformity, meanwhile, involves public compliance with a particular belief or attitude, but not private acceptance of it. In other words, individuals may change the way they behave to fit in, but they don’t change the way they think or believe internally.

Some examples of conformity include the following:

The second form of social influence to be aware of is compliance. Compliance refers to any situation in which individuals change their behavior because they’re requested to do so. This is a unique social situation inasmuch as it’s partially voluntary: The individuals choose to go along with the direction or request of the group, while still disagreeing with the group.

Compliance can be gained in different ways. Sometimes, it comes as the result of a direct, explicit request. In other situations, compliance may be gained more insidiously. Here are some examples.

Of course, not every request is met with compliance. A number of factors can determine whether an individual complies, including the following:

The third form of social influence to consider is obedience. Obedience is similar to compliance, but with one critical distinction: In situations involving obedience, the individual responds not to a request from a peer, but rather to an order from someone in authority.

In other words, where compliance involves social interactions between people who consider themselves equal, obedience involves one party who wields a higher social standing. This may be a civil authority, an employer or supervisor, a teacher, or anyone else who occupies a higher position on the social ladder.

Researchers have found that most individuals will readily accept the authority of another person, and they’ll respond to that authority through acts of obedience — even if this means harming someone else:

Studies have also found that obedience is by no means exclusive to U.S. culture. In fact, obedience rates of 80% or higher have been found in nations including the Netherlands, Italy and Spain.

How Does Society Shape and Influence Individuals?

Psychologists agree that all individuals are affected by social influences, and their actions can often be understood in relation to social norms, trends, customs and rules.

The role of an individual in a social hierarchy can influence behavior. For example, someone who works as a surgeon or holds a position of authority in the military will likely conduct themselves differently from circus performers. This stems from a social assumption that a surgeon or military leader will be more serious, or go by a different set of values, than a trapeze artist. Individuals will often behave in a way that fulfills the role they play in society and the social assumptions that accompany it.

Social standing can determine whether a person complies with or obeys the wishes of another person. A student may obey a direct order from a teacher in acknowledgment of the disparity between their social positions. Meanwhile, a fellow teacher may comply with the friendly request of a peer, wishing to gain approval or friendship.

Societal norms are also significant. Most individuals in U.S. culture greet new acquaintances with a wave and a friendly hello. No one is mandated to behave this way, but failure to do so may lead to social awkwardness. Some additional examples of societal norms, typically followed without questioning, include the following:

The presence of majority groups can also shape the way people behave. People in a majority group may feel compelled to uphold certain beliefs or behaviors to maintain their inclusion in that group. Those outside the group may try to change their actions to gain inclusion. In both situations, the driving impulse is the fear of being left out.

Finally, prevailing belief systems can influence behavior. For instance, individuals who are in a predominantly Christian environment are more likely to comply with Christian ethical norms, regardless of whether they privately accept these norms, simply as a way of fitting in.

Pursue a Career in Psychology

An understanding of social influence can be valuable in many professional fields. Sales and marketing professionals can leverage social influences to sell products or get the desired response from a potential customer. People who work in organizational psychology, meanwhile, can use principles of social influence to alter behaviors of their team members, ensuring obedience to or compliance with guidelines.

As for where an individual can begin developing an understanding of social influences, a good place to begin is by pursuing an education in psychology. A formal degree program, like Rider University’s online Bachelor of Arts in Psychology, provides a firm foundation in social influence and other important psychological concepts. The program is designed to help individuals grow in understanding and also to hone the skills they need for career advancement.

To learn more about the benefits of pursuing an education in this field, explore Rider University’s online Bachelor of Arts in Psychology today.

Careers in Psychology with a Bachelor’s Degree

How to Become a Guidance Counselor: Job Description and Career Outlook

Simply Psychology, “What Is Conformity?”

Verywell Mind, “The Concept of Obedience in Psychology”

Verywell Mind, “The Psychology of Compliance”