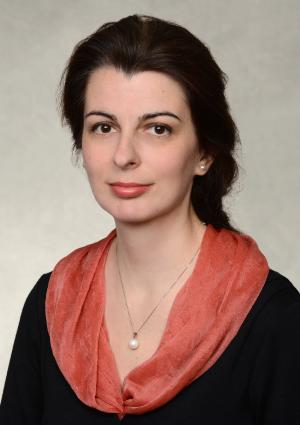 Dr. Catrinel Haught Tromp spends a lot of time thinking about thinking. With a PhD from Princeton University in cognitive psychology — the study of the mental processes involved in perception, learning, memory and reasoning — Tromp’s research interests include creativity, language and organizational behavior. “I’ve always been intrigued by how people think, and especially how we process language and think creatively,” she says.

The Paradox of Constraints

Tromp is interested in the role of constraints in promoting creativity and why and how they work. While conventional wisdom has it that creativity increases with the freedom to create, her experimental research supports the opposite conclusion: that constraints facilitate creativity. This paradox, that decreasing the number of available options increases creative outcomes, explodes the myth of freedom to create and has practical applications for individuals and organizations looking to unleash creativity.

Her research, conducted at Rider University, where Tromp teaches in the bachelor’s in organizational psychology  and bachelor’s in psychology programs, is the subject of an upcoming book she’s writing with two colleagues, from Rider and Cornell, titled The Paradox of Constraints in Creativity: Interdisciplinary Perspectives.

The Green Eggs and Ham Hypothesis

Anecdotal support for the hypothesis that constraints facilitate creativity can be found in the pages of Dr. Seuss’s bestselling children’s book Green Eggs and Ham. As the story goes, Seuss’s editor, Bennett Cerf, challenged him to write a book using only 50 words — including “Sam,” “here,” “there” and “anywhere.” Previously, Seuss had penned The Cat in the Hat using only 255 words, so Cerf was upping the ante. More than up to the task, the limitation helped Seuss produce one of the most successful children’s books of all time.

Apparently, the 50-word limit imposed on Dr. Seuss sparked his creative genius. But how? Tromp explains that constraints work by “closing doors” and “narrowing the exploratory space. Fewer available options encourage a more focused, thorough search within the existing space, and facilitate mining and probing beyond the surface.” By doing so, constraints increase the likelihood of finding novel associations — like “Sam I am” — and a more creative output.

Tromp’s favorite line from the book is “Try them, try them, and you may,” spoken by Sam about liking green eggs and ham. The same can be said for liking constraints, she says. Indeed, her interest in constraints led her to conduct two experiments described in a peer-reviewed paper that references the famous children’s book.

“In my research I wanted to test what I call the Green Eggs and Ham hypothesis, inspired by Dr. Seuss’s success in using constraints,” explains Tromp, who published her findings in a 2017 paper titled “The Green Eggs and Ham Hypothesis: How Constraints Facilitate Creativity” in the academic journal Psychology of Aesthetics, Creativity, and the Arts.

Using a common and familiar task — dreaded by many — Tromp challenged study participants to compose a creative greeting card message to a friend, family member or co-worker. Specifically, they were asked to generate two-line rhymes to convey a special message such as “happy birthday,” “thank you,” “I love you” or “feel better.”

The takeaway? Constraints can set you free.

As demonstrated in Tromp’s experiment, you don’t have to be a creative genius like Dr. Seuss to benefit from constraints. “Experimental evidence suggests that constraints also help regular people become more creative,” she says. “They can help anyone regardless of their baseline level of creativity.”

Minus constraints, people can be overwhelmed by too much freedom and gravitate to the familiar, which is likely to yield only clichés, according to Tromp. She likens the paradox of constraints to the paradox of choice in decision-making research, which shows that lots of options lead to decision paralysis or poor decision-making. “Too many options stifle creativity, as anyone who has suffered from writer’s block, for example, can attest,” she says.

What can individuals and organizations learn from Tromp’s research to facilitate creativity? She recommends avoiding the familiar and embracing the novel, whether it’s using different materials or a different method or process. A poet, for example, could switch to writing prose, or vice versa. A cook who favors garlic might replace it with a new ingredient.

Likewise, artists and writers who find themselves stuck when beginning a new project should experiment with different constraints such as a red line on a blank canvas, or including four random words from the dictionary in a composition. Even if particular constraints don’t make it into the final product, the experience of playing around with the constraints may stretch and facilitate creative thinking, she says. Other requirements for creativity include motivation and persistence — important elements of success in most worthwhile endeavors.

Constraints in the Classroom

As an assistant professor at Rider since 2011 and currently an associate professor, Tromp has had time to see constraints at work in the classroom. Among the half-dozen courses she teaches is statistics, a subject she says can trigger apprehension and even anxiety in students. “I love the challenge of working with these constraints in terms of students’ initial attitudes and finding creative new ways of stimulating learning and engaging the students in the process,” she says, “especially for those courses that seem more daunting.”

From Shakespeare to Dr. Seuss, “some of the most compelling instances of creativity occur in the production of language,” Tromp contends. As a native of Romania who came to the United States as a 15-year-old exchange student, she is fluent in Romanian, French and English. She also speaks some Spanish and Dutch (her husband is from the Netherlands), although she is not proficient.

Being multilingual, it’s no surprise that language is another area of interest for Tromp, whose dissertation was on the subject of figurative language — defined as phrasing that goes beyond the literal meaning of words — and the relationship between metaphor and simile.

The intersection of language and creativity interests Tromp, who also teaches a class in child development at Rider. She notes that young children are naturally creative and quick to pick up second languages. “Bilingual children tend to score higher on measures of analytical reasoning and cognitive flexibility, an important part of creativity, she says.

Learn more about Dr. Catrinel Haught Tromp and how a Bachelor of Arts in Organizational Psychology from Rider University prepares students for a wide range of management and business careers.

Careers in Psychology with a Bachelor’s Degree
Performance Psychology: The Ultimate Guide to Getting the Most Out of Your Team
What Is Organizational Leadership and Why Is It Important?