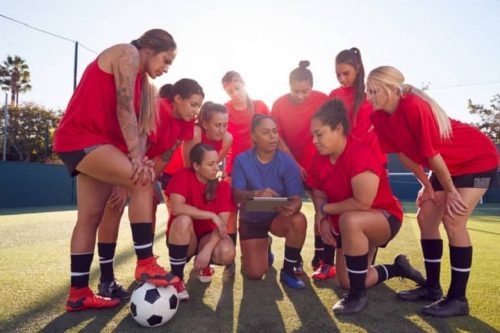 One significant force behind changes to women’s collegiate athletics is Title IX of the Education Amendments of 1972. By making coaching jobs in women’s athletics more lucrative, this civil rights law has had unintended consequences for female coaching. According to a 2018 report from the Tucker Center for Research on Girls & Women in Sport, women hold only about 20% of all college coaching positions.

Before 1972, no scholarships or championships were available to female athletes in college, and women’s facilities and program funding typically were subpar compared with men’s. Only 30,000 women participated in sports sanctioned by the National Collegiate Athletic Association (NCAA), according to the History channel, whereas 170,000 men took part.

Of the coaches for women’s teams at that time, Forbes magazine reports, 90% were women.

Today, female students have made tremendous strides in collegiate sports participation. For female coaches, however, collegiate athletics has room for tremendous growth.

Over the last five decades, female participation in collegiate athletics has jumped to 150,000, according to the History channel.

On the other hand, by 2019, the percentage of women among college coaches had dropped significantly. Women accounted for just 41.2% of head coaches and 49.6% of assistant coaches of women’s teams in NCAA sports, according to a report from The Institute for Diversity and Ethics in Sports (TIDES).

In men’s sports, the percentage of women in head coaching positions was in the single digits.

Areas for Reform in Female Coaching

Lack of female representation is just one area in which college coaching still has room for significant strides toward gender equity.

A 2020 Women’s Sports Foundation (WSF) report cited gender bias as one example of another opportunity for change. It notes 75% of female college coaches say men can more easily negotiate salary increases. Furthermore, nearly a third of female coaches believe they would risk their jobs by speaking out about issues such as gender equity.

Additionally, coaching is not the only athletics-related leadership position in which women hold an undersized role compared with men. The TIDES report notes that women constitute 13.6% of athletic directors in Division I, the top level of NCAA sports. The percentages of women among Division II and III athletic directors are 17.5 and 31.7, respectively.

The passage of Title IX mandated fair and equal treatment of women in all areas of federally funded education, including athletics. The change required that scholarships for women’s and men’s teams be established through equitable funding formulas. It also mandated equal access and quality for women’s and men’s college athletic programs.

The discrepancy in progress between female athletes and female coaches since Title IX’s passage may stem from the more attractive coaching opportunities that resulted from additional funding for women’s athletics.

Forbes reports that when coaching jobs for women’s athletics became more attractive to both men and women, men often applied for and got the jobs. Most athletic directors — who make coach hiring decisions — are men, who may be more likely to hire other men.

Women represent a comparatively low percentage of coaches in collegiate sports, but the impact of female coaches argues for increasing their numbers in college and beyond. Women in coaching play several important roles in developing athletes and future leaders.

The following are among the ways female coaches make an impact, according to research and advocates for female coaching:

Become a Female Coach and Make Your Impact on Collegiate Sports

Ready to boost the number of female coaches in collegiate sports and make a positive impact on athletes and future sports leaders alike? Through Rider University’s Master of Arts in Athletic Leadership program, students can get the competitive edge to help advance their careers and make a difference.

The program focuses on coaching philosophies and techniques, as well as player safety, providing students with the skills that will allow them to get the most out of their athletes. Furthermore, the online format provides maximum flexibility in scheduling.

Explore how Rider University’s Master of Arts in Athletic Leadership program can help you reach your professional goals.

How to Become a Basketball Coach

What Is Sports Analytics? Using Data to Gain a Competitive Edge

Athletic Business, “Only 20 Percent of College Coaches Are Women”

BizFluent, “What Are Some Advantages of Diversity in Teams?”

Forbes, “Here’s Why Women’s Teams Are Coached by Men”

The Institute for Diversity and Ethics in Sport, 2019 Racial and Gender Report Card: College Sport

The Sport Journal, “The Influence of Gender on Perceptions of Coaches’ Relationships with Their Athletes: A Novel Video-Based Methodology”

Women’s Sports Foundation, “Chasing Equity: The Triumphs, Challenges and Opportunities in Sports for Girls and Women”